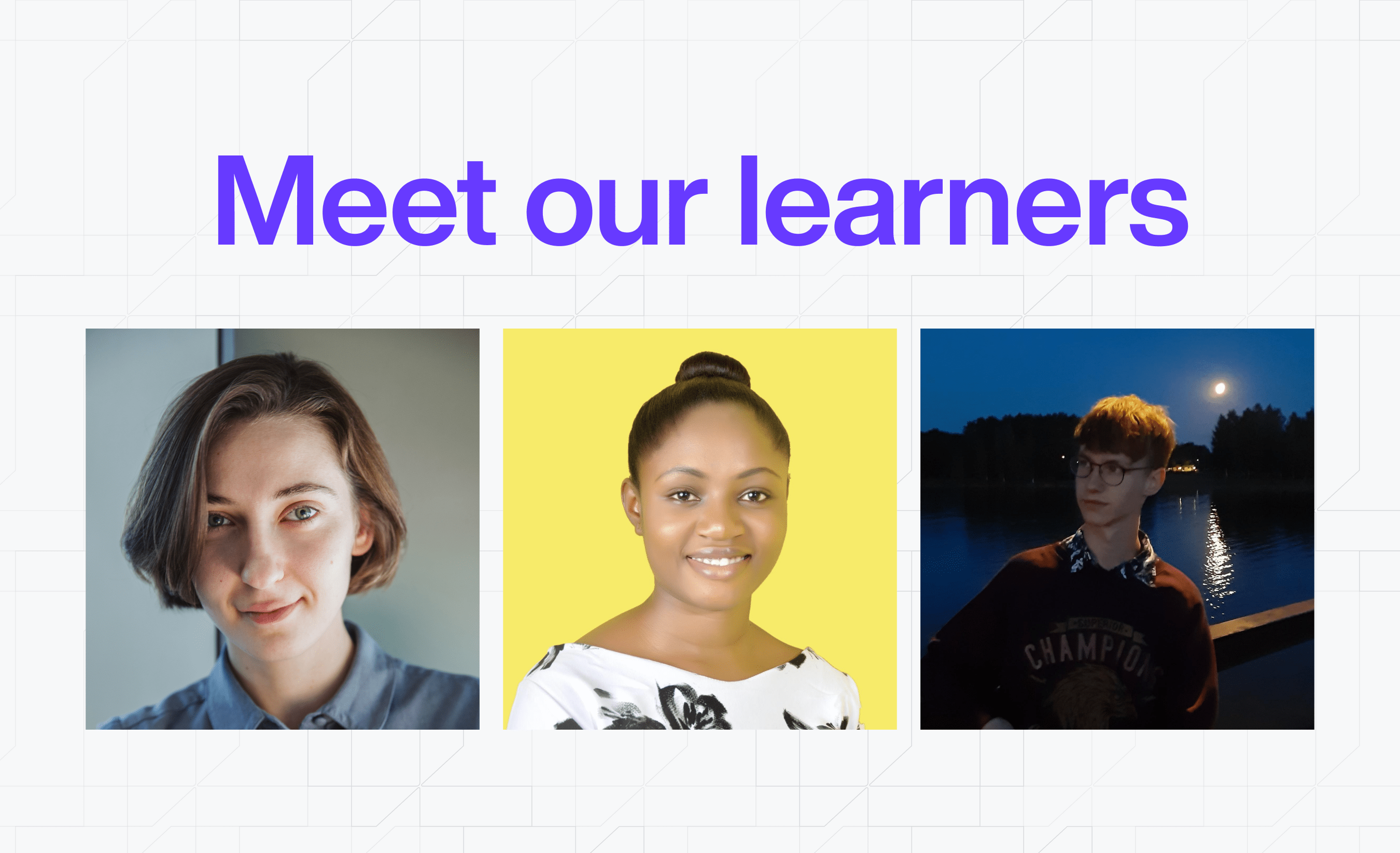 What typifies a Turing College learner?

It isn't their educational background (as we showed in our first "meet the learners" article, Turing College learners have very varied levels of experience in data science and coding before they start.)

And it isn't a specific personality type. Our learners have perspectives as diverse and varied as the discipline of data science itself.

But two things they do all share is curiosity and ambition.

And that's certainly the case with Fortune, Robertas and Ruta. All 3 have different educational backgrounds (Mathematics, Business Administration and Computer Science). And they also have different passions. Fortune is a self-confessed "techie", Ruta is fascinated by the impact data and reporting can have, and Robertas loves computing and Machine Learning.

And they all have a strong vision as to where their career will go, with Turing College playing an important role in getting them there.

So, it's time to meet Fortune, Robertas and Ruta to find out a bit more about their curiosity and ambition.

Meet Fortune, the "cool techie" who's discovering that data science is much more than just coding

Fortune Uwha is a self-confessed "cool techie." Ever since she graduated from her studies in Mathematics, she envisioned herself as the tech expert who would help businesses make better decisions. During her journey from fixing mobiles through to learning coding all the way to her current studies at Turing College, she has learned that there is a lot more to data science than first meets the eye. Fortunately for Fortune, she's a life-long learner who's constantly curious.

From mathematics to data science

Fortune started off in Mathematics, graduating with a BA in the subject from the University of Benin in Benin City, Nigeria's 4th largest city. But she always had tech in her heart.

One of her first jobs was as a phone repair technician (if you have any software or hardware problems with your mobile, Fortune's got you covered.) But she was keen to apply her passion for tech in a way that would actually impact decision-making in businesses. And the answer she found was: data.

"I heard about data science right after my university days," Fortune explains. "As I learnt more about data science, the more involved in it I became. In the end, I decided this was the career I wanted to pursue."

Fortune puts this discovery of data science down to her constant curiosity and desire to pick up new skills. Having decided data science was the career path that would satisfy this curiosity, she soon had a pretty clear vision of how things would progress.

"The plan was to learn a programming language, and then apply it to real data," says Fortune. "Then I would be the "cool techie" helping the company make business decisions."

Data science is much more than just coding

Fortune got her first real taste for data science working as a Data Analyst at Opay, a Nigerian fintech. Working as a data analyst provided an opportunity for growth and learning, the perfect fit for Fortune.

"I am continuously focused on learning and self improvement," she points out. "And that's what makes data science so exciting. Data analysts/scientists are constantly learning and journeying their way through data, every day."

But data science also proved to be a much broader and more complex field than Fortune has imagined. Far from simply learning a programming language and simply applying it to data, there were a whole range of skills to master. "Data science turned out to be so much more than just coding."

Turing College is Fortune's path to a data science career

Fortune joined Turing College's second batch of learners. During the course, her eyes have been opened even more to the sheer variety and complexity that exists in the field of data science.

"Data science is something that gets me really, really excited," she says. "The career path is so broad. For me, it definitely hasn't been a clear path so far, more like a bumpy road filled with ups and downs. But then, it's not meant to be easy, and anything in life that is new and worth doing is a challenge sometimes."

The soft skills Fortune is learning at Turing College will help her work seamlessly as part of a larger team, a side of the data science role that she is very much looking forward to. "Data science is a team sport," she points out. "I look forward to working in a data science team while contributing and improving my skills."

"In the end, I will still get to be the cool techie helping with business decision-making, but this time I won't be alone. I'll be part of a team of high achievers."

Since childhood, Robertas has been fascinated by computers and programming. From playing around with computers as a kid, through to running his own e-commerce businesses, Robertas has never stopped "figuring stuff out." Now, as a learner at Turing College, it is machine learning that he is especially fascinated by.

A natural interest in computers and robotics

From a young age, anything programmable has captivated Robertas. "I have always thought that robotics and machine learning is super cool," he says. "The idea that we can program a computer to perform tasks better than humans can is a wonderful concept for me."

This natural curiosity dates back to Robertas' childhood, when he would "play around with the computer and figure stuff out." His passion for computers and programming remains undimmed, although his career so far has taken him in other directions.

A shift from computer science to e-commerce

Robertas' educational background is firmly focused on programming. Having attended a full stack web development course at a local bootcamp, he then studied Computer Science at Vilnius University. But during his studies, Robertas' natural curiosity took his life in a different direction.

Having learned about e-commerce and marketing on the side, he founded a couple of e-commerce stores while still a student. Their success led him to put his studies on hold so he could fully focus on developing his businesses. This meant a shift in focus towards sales and marketing over this period.

Having developed as an entrepreneur, Robertas was then keen to return to his natural interest in computing and machine learning. Turing College was a natural fit, and he enrolled in the third batch of Turing College learners in the Spring of 2021.

He didn't know what to expect, except that "it was going to be hard." But the learning model Turing College follows is a perfect fit for Robertas' curious nature. His eagerness to learn means he is constantly asking questions of his fellow students and the Senior Team Leads that guide learners through the course.

His expectations for his career after Turing College are not clearly defined yet, but he expects the journey to be "fun, challenging, probably stressful at times." With his natural curiosity, it sounds like this is just how Robertas likes it.

Meet Ruta, the business grad with an international focus

Ruta is a graduate in Business Administration with a passion for data and IT. Time spent in two international organisations, Tesonet and Marriott International, gave her an introduction to IT and computer networking. And these experiences also prepared her for work in teams delivering global products. With eyes opened to the potential of data and reporting on guiding business decisions, she jumped fully into data science, learning Python and data visualization at a local coding school. And now Ruta is furthering her career through her studies at Turing College.

A business administration graduate who sees the big picture

Ruta's journey towards data science all began with her studies in Business Administration at Vilnius University. While her specific focus during her studies was on marketing and global business, she gained a solid overview of the business landscape.

This understanding was augmented by her work as a Customer Success Manager at Tesonet. Tesonet is a major software developer with a global customer base (and also a Hiring Partner at Turing College), so it was the perfect place to witness the ideas she was learning being implemented in practice.

A change in focus to data science

In her role at Tesonet, Ruta gained insights into a range of IT functions. She also learned the basics of computer networking, which she found very intriguing.

This curiosity culminated in her asking her manager if she could start playing around with some data and reporting. She tried out a business intelligence tool that the customer success team was using, and even wrote some SQL.

These first experiments were enough to spark Ruta's interest, and she decided that she would try out for an internship as a data analyst. First, though, she wanted to arm herself with some of the core skills she would need. So, she signed up to a coding school in Vilnius, where she learned some Python and also data visualization.

Her newly acquired data skills, plus her bachelors, were enough to land her a challenging internship as an HR Analyst at Marriott International, one of the world's largest hotel and hospitality companies.

Fully committing to a career in data science

The first notion that a career in data science might be possible for Ruta came while she was at the coding school. One of her teachers was a data scientist. He inspired Ruta both to improve her skills as a data analyst, and to consider this field as a realistic career option.

Then her time at Marriott International confirmed to her that data science was indeed her calling. As an HR analyst, she worked with existing data to create reports and dashboards for the HR department to use. She was also tasked with gathering more data from existing sources.

After completing her internship, Ruta decided that data science was the career path for her. She liked the fact it was more oriented to STEM skills, and that she could use correlation and pattern recognition to predict how things might develop.

With her mind set on data science, Ruta enrolled in the first batch of learners at Turing College in the Fall of 2020.

In her studies, she has covered the topics she expected to. Her experience had taught her that the lines between data-related roles are often blurred, so she expected to learn more about data engineering and data analytics.

She also fully anticipated a strong focus on maths and statistics. That's because she understood these skills are essential for understanding how models are created and uncovering the intricate details of how they work.

One important lesson Ruta has learned during her time at Turing College is that she had been focused a bit too much on the tools used in data science. While Python and Machine Learning are very important, they are only means to an end, and not the end itself. The goal is to have a positive impact on the organization you are in, and smart data scientists need to choose the right tools to achieve this goal.

Ruta's ultimate goal once she has completed her learning at Turing College is to land a role in data science where she can develop analytical methods and Machine Learning models of her own.

Are you ready to follow Fortune, Robertas and Ruta into a new career

As the cases of Fortune, Robertas and Ruta show, studying data science at Turing College is a realistic option for people with a range of backgrounds and experience. You just need to be ambitious, curious and up for a challenge.

If you're keen to apply, take a look at this step-by-step guide to the admissions process, which includes details of when our next course begins.

Enroll in our data science curriculum

We are planning for another full-time course in early 2021.