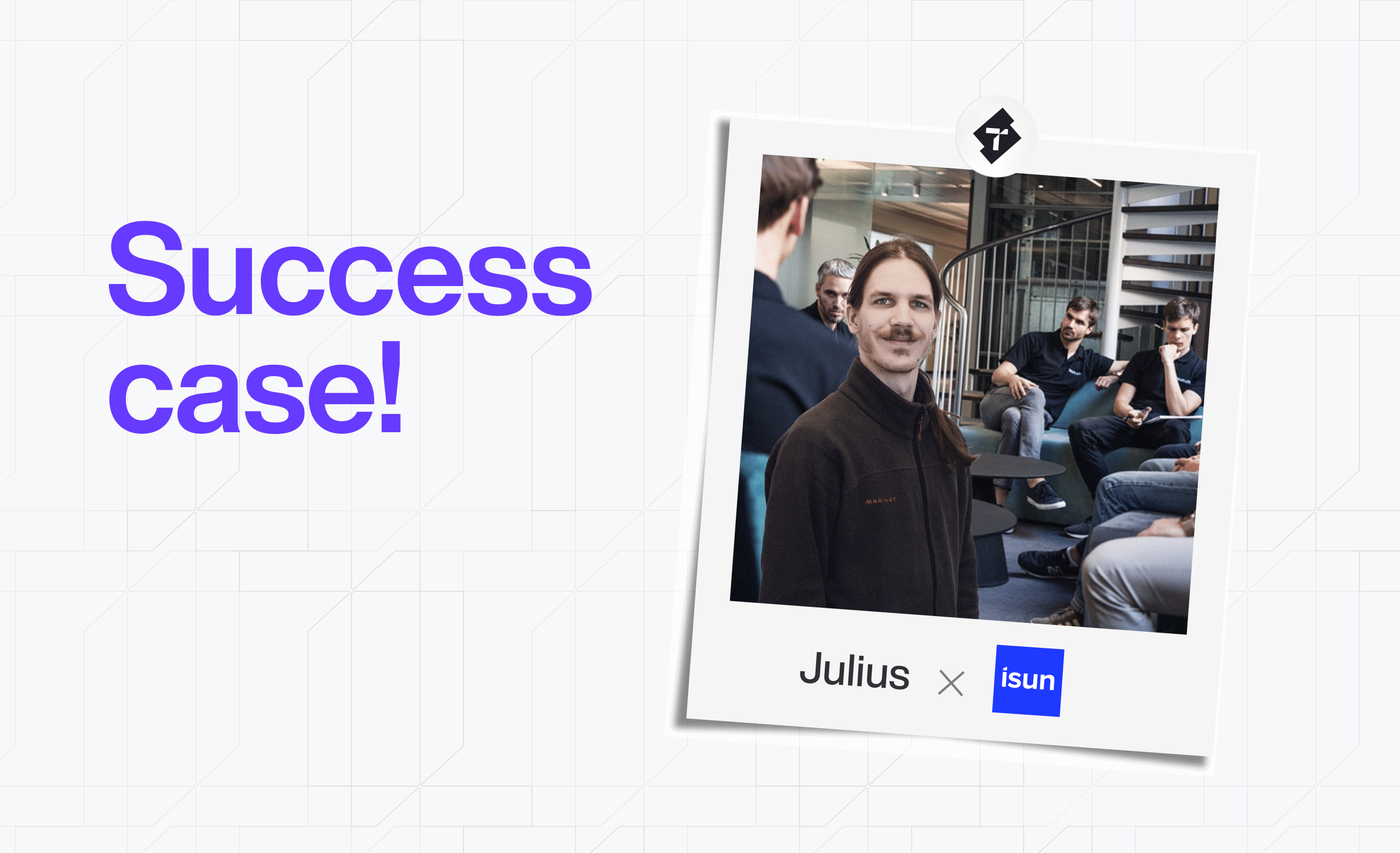 Julius Juodagalvis has become the first Turing College learner to be hired, having secured a position at iSun. iSun is a Swiss software developer with expertise in blockchain, data processing, web development and design, and has recently become a Turing College Hiring Partner. Julius will be helping them to tackle their data science challenges.

Turing College is a data science career school that offers pay-when-employed courses. And for companies, it provides a streamlined and data-driven approach for hiring IT talent. Learners are carefully selected from the top 10% of applicants. They can pay upfront, or they can sign an income share agreement (ISA) which means they pay for their studies once they are hired and working. As a result, Turing College is incentivized to ensure that, on graduation, learners are then hired. That is why Turing College places so much emphasis on developing talent that is ready to work on day one.

Turing College has a network of Hiring Partners that includes, among others, Omnisend, Nord Security, Satalia, Biomapas, Hostinger and iSun. As learners progress through Turing College’s self-paced learning platform, they build a detailed portfolio. Hiring Partners can view these portfolios, enabling them to make data-driven recruitment decisions in days, not months. For learners, instead of a diploma, they simply get a new job. And Julius is the first to do so.

Julius has been interested in data science since 2015. A year after graduating high school, and having left his university studies in Informatics because the course was “wasting my time,” Julius took a Coursera course in Deep Learning. “At that time in Lithuania, recruiters weren’t looking for data engineers, data scientists or machine learning engineers,” Julius explains. But his interest in data science was born: “the challenges I worked on during the course were challenging and stimulating, and the pay seemed good.” So, after studying marketing in Denmark, working in the insurance sector, and a stint as a Wolt delivery driver, Julius decided to try again at a career in data science: “I was fed up with driving my bike on the ice.” He started working as a data engineer, and then in the Fall of 2020 he enrolled on the first ever Data Science course at Turing College.

Turing College focuses on the development of both hard and soft skills, ensuring learners are ready and able to start contributing from the first day in their new job. In terms of his hard skills, Julius has a deep knowledge of Python and is able to code quickly. Deividas Skiparis, a Machine Learning Engineer at Vinted and a Senior Team Lead at Turing College, noted that Julius “can quickly go from an idea to code, and has a remarkable ability to manipulate datasets.” As for his soft skills, Julius is a team player who is ready to share his knowledge, and he has the ability to deliver precise feedback. As the Head of Education at Turing College, Giedrius Zebrauskas, has noted, “the qualities Julius displays at Turing College will make him a tremendously useful addition to any new team.”

As an official Hiring Partner of Turing College, iSun had access to Julius’ portfolio of work, and has been able to recruit him even as he finalises his studies with Turing College. “We have recently become a Hiring Partner with Turing College, and we are happy that Julius will be bringing his coding skills and team-centered approach to our company,” says iSun's Director, Ieva Trinkūnaitė. “At iSun we don’t believe in cutting corners, whether it is working with our clients or recruiting members of our hardworking, capable team. Turing College’s approach enables us to make informed decisions on recruitment, and we look forward to further growing our team with more high-achieving talent.”

iSun, a Swiss developer with an office in Vilnius, has so far delivered 31 IT products to its clients since its inception in 2018. Products developed by iSun are being used in 139 countries, and it is currently working with 25 different clients. iSun’s team has written over 11 million lines of code, and soon Julius will be adding more.